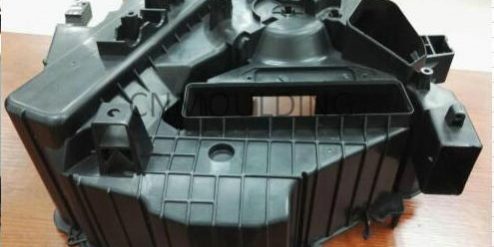 Part Refers to customer drawing or sample to the manufacturer custom plastic part.

Tools Refer to the injection mold that is created to make plastic parts in the molding process.

Shrinkage refers to how much the plastic material will shrink rate after cooled. This percent of shrinkage is added to the part before the mold is designed. Every plastic material has its own shrinkage ranging from .001 per inch to as much as .060 per inch. Although most fall in between .004 and .021. It is important when selecting a range of plastic materials that you may want to test before building the injection mold. For example, if you wanted to use  Polycarbonate which is .006 per inch, and Nylon which is .015 per inch you may want to build the injection mold to .010 or leave critical dimensions stock safe until a final material is selected.

Gate Referring to where the plastic enters into the cavity of the mold. Types of gates include; sub, edge, fan, cashew, and XME exclusive vestige free edge for perfect shear.

Vestige Material or witness of material protruding from the gate area after gate runner has been removed from the injection molded part. This vestige is usually trimmed by the molding machine operator.

Shear referred to when plastic enters into the mold and the melt is maintained by friction produced by speed and pressure. Too much shear can cause the plastic material to burn. Too little can cause the material to freeze off causing short shots.

Short Shot Is the result of a plastic part not filling completely, including some or all of the details.

The sprue is perpendicular to the runner and is the channel that links the injection molding machine nozzle to the runner.

Hand Pull Portion of the custom injection mold that is used for creating undercuts in plastic parts.

Gibbs Portion of the custom injection mold that holds the slide down so the cam can actuate it.

CAM/HORN PIN The cam commonly referred to as the Horn pin is used to actuate the slide on an automatic injection mold.

Ejector Pins are used to pushing the part off the core half of the injection molds.

Undercuts Refers to the portion of the designed component where a slider or hand pull is required to create holes, windows, or clips that are not in the line of draw.

Core Refers to the side of the tool where the plastic part will stick to and is ejected from, also known as the bottom half of the tool.

Cavity Refers to the upper half of the injection mold usually the show surface of the finished product but is mainly concave. There are not as many standing core outs on this side of the tool. Therefore the part will generally not stick to it when the injection molding machine opens the mold.

Core Outs Refers to the portion of a part that is gutted out in order to achieve uniform wall thickness. This portion of the part has no end use function other than lightening the part and reducing warp.

Line of draw Line of the draw is the direction in which the two custom injection mold halves will separate from the plastic part allowing it to be ejected without any obstructions from metal creating undercuts.

Slider Action Is the term used for sliders and/or hand pulls used in the injection mold build process. If your design requires side action it will require a slide or hand pull to make the plastic part in order to run in the molding process.

Part Price Refers to the cost of each plastic part as produced in the injection molding process.

FDM Fused Deposition Modeling. Using three-dimensional printing technology where prototypes are made by fusing layers of actual ABS plastic together. Much like an inkjet printer except it lays Plastic instead of ink.

Wall Thickness This refers to how thick the cross-section of the plastic part is.

Thin Wall Molding Thin-wall molding is the molding of plastic parts with wall thicknesses .005 to .060thick.

Boss This refers to round protrusions on plastic parts and molds.

Ribs Refer to thin-bladed features on a part that are used for strengthening wall sections and bosses. Also, used to minimize warp.

Sink Marks Refers to areas of the molded part where it seems to be sunk in, due to un-uniformed wall sections. Thick wall sections and rib/boss to thickness ratios being off.

Warp Refers to the area of an injection molded part that distorts during cooling or molding, causing undesired results in the finished product. Usually caused by un-uniform wall sections.

Draft Angle Refers to the portion of the injection molding part that has some sort of taper to it. Generally, all plastic components should be designed with a draft where possible. See design guidelines for tips.

Heel Refers to the portion of an automatic custom injection mold that keeps the slide in the forward position. When the molding machine is closed on the mold.

Stock Safe Refers to the amount of metal left on the mold in order to tweak in a dimension. For example, if you have an inside diameter that is supposed to be .500 you may leave the mold at .505 in case you get excessive shrink. It is cheaper to remove metal than it is to add it.

Bulk Pack Refers to shipping plastic parts in a box without any form of stacking. At the injection molding machine Parts will be dumped in a box and shipped.

Reverse Engineering Refers to the process of taking an existing plastic part and creating a 3D solid model for duplicating in the injection molding process. Sometimes the design may include some custom changes from the OEM.